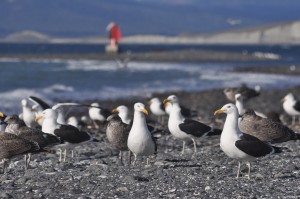 We had just spent two months cruising around the Chilean canals in the region of the glaciers, and having returned to Puerto Williams we decided to wander over to the long spit opposite the town in order to visit the seagull colony. The location is a nesting site for two varieties of sea bird: the black and white kelp gull (Larus dominicanus) – a species which is common and widespread – and the dolphin gull (Leucophaesus scoresbii), a much smaller, dusky-grey bird with a striking red beak and legs. Although we’d witnessed the beginning of the bird’s breeding season, we knew that by now most of the young ones would already have fledged.

As I walked along the pebble beach, beneath a shrieking cloud of white adults and flanked by the apprehensive brown juveniles which stood along the waterline, I noticed a young bird that was clearly ill: it was crouched on the beach with its wings slumped into the sand, and was only capable of protesting feebly when I went towards it and picked it up. But by the time I reached it I had already noticed two others in a similar condition; and it became apparent that I was picking my way through the corpses of this year’s chicks.
One or two dead chicks are normal in a seagull colony, but fifty – in a population where the total number of chicks produced that year was probably only about 150 – is not. Even more noticeable was the fact that they were all of fledging age; none had been dead for much longer than a week. They were without exception from one species, the kelp gull, and they outwardly appeared to be in perfect health; large and well fed, with crisp, immaculate, plumage. (A few had small head wounds, which I attributed to the gulls’ habit of attacking weak or ill individuals).
In an effort to get to the bottom of the case I took three of the ill birds home with me; one of which was dead within minutes, and another proved too weak to save and didn’t last the first night. The third was a nice-looking fledgling which responded well to captivity and still seemed fairly strong. Its problem became apparent only once I started to feed it: much as it tried, it could not swallow even the smallest particles of solid food. I was obliged to water-down canned dog food and feed it with a syringe, but it succumbed two days later. 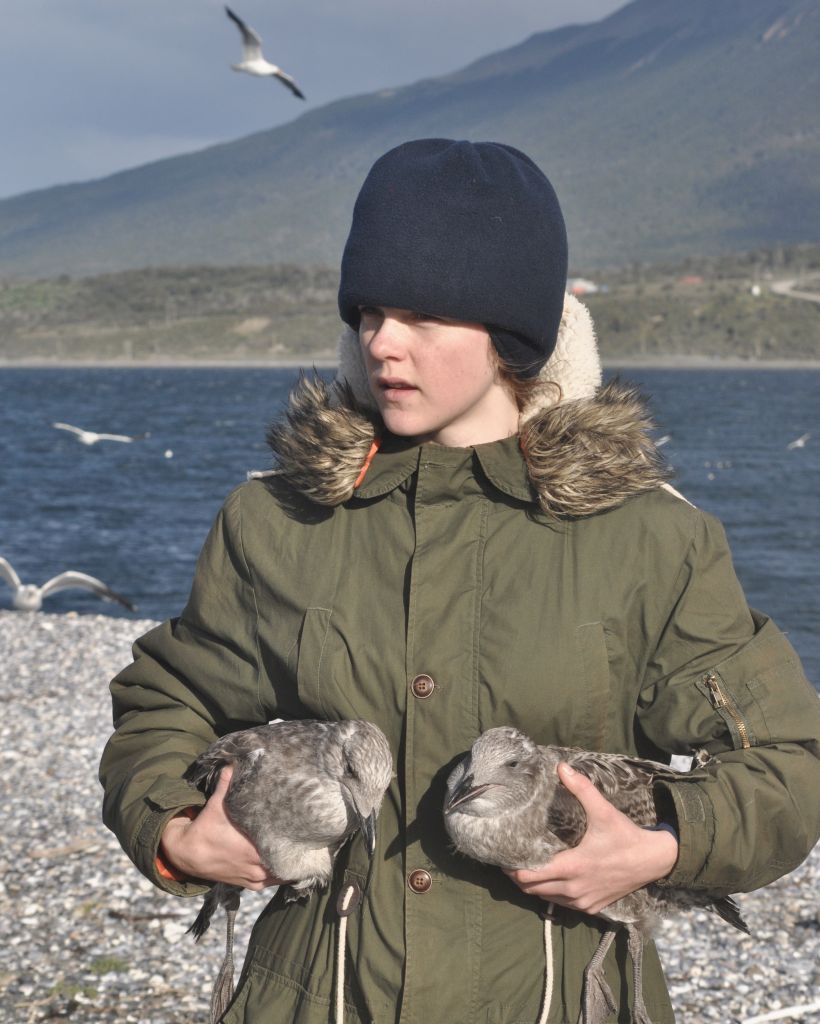 Over the next week, while the gulls on the spit continued to die, I contacted various experts to try and find the cause. We eventually located some local ornithologists in the town. They were interested enough to ask me to bring them two corpses for autopsy; but not interested enough to look at the beach for themselves (apparently they specialised only in woodpeckers). Within a few weeks the epidemic seemed to be over, most of the juveniles had dispersed, and the sand spit had become the haunt of dozens of birds of prey (Milvago chimango) tearing apart and scattering the corpses. The absence of a large part of this generation of kelp gulls is the only result. The two cadavers are, as far as I know, still in a fridge awaiting examination – but according to the biologists, there is little chance of us ever knowing what caused the birds to die.

What has stuck me most about this incident is the reactions of other people upon hearing about it. Two or three other sailors have remarked that the same thing happened this year in an albatross colony in the area; with most of the young birds dead and “nobody knows why”. Another, a self professed “bird expert”, mentioned a near-identical case in a penguin colony nearby. A woman who spent this year working in South Georgia said that it was “a bad year for the birds” there, many of which never fledged.
The remarkable thing about these stories is that they are just that – hearsay. I have been unable to find any information about the albatross colony or even the birds in South Georgia, and no reference to a bird die off anywhere in Tierra del Fuego. Seemingly, the incidents haven’t been publicised, studied, or even recorded.
If a dramatic die-off of a common bird, on the beach in front of Puerto Williams – within sight of every window in the town and a five minute drive away from the research center – has taken place unnoticed and uninvestigated, can we say for sure that every bird colony in Tierra del Fuego hasn’t lost half its chicks this year? The vast majority must be miles from civilisation, and nobody would be any the wiser if they had failed entirely. 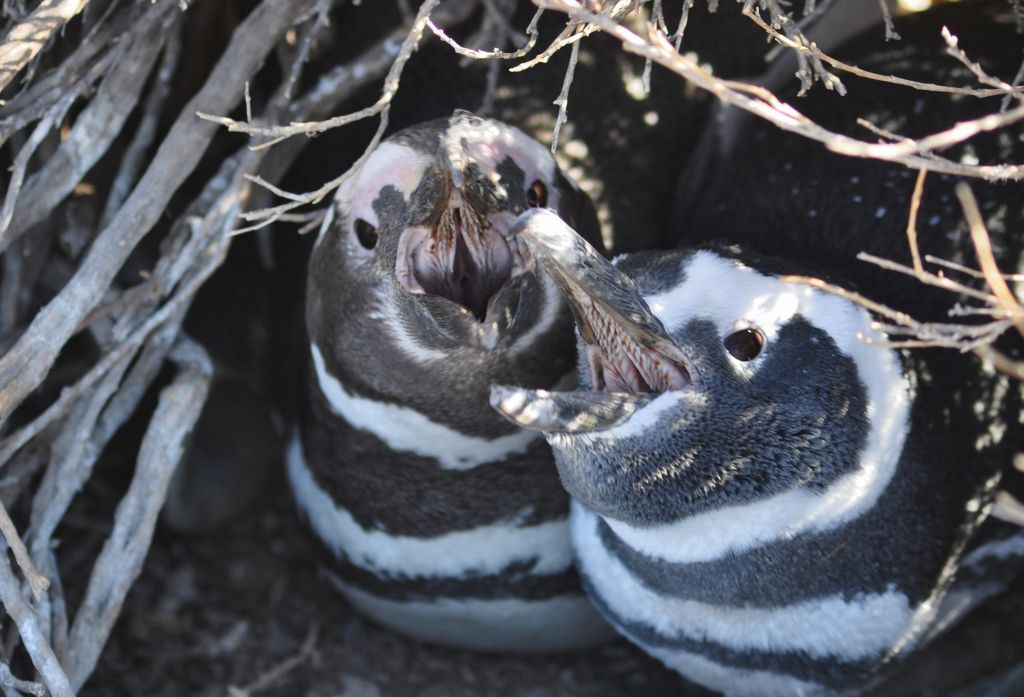 A plausible rumour – are penguins in trouble too? Spheniscus magellanicus in southern Argentina. (Photo by Jill Schinas)

Although I didn’t find any reference online to bird epidemics, searching for die-offs on the shores of Chile certainly does produce results, a disturbing number of which are for 2016. There is the well publicised death of salmon in the fish farms, a corresponding, equally devastating sardine die-off; and then the completely mysterious appearance of 340 dead whales – the largest stranding in history. A little to the north, hundreds of dead sea lions started washing up on beaches. An astronomical number of dead squid suddenly appeared on the coast of Chile recently, forming rotting heaps. And that’s just in the last year or so – and, more to the point, just what was noticed on a largely unpopulated stretch of coast. All of these incidents received attention from outside the country, and many of the articles had headlines to the effect of “Yet another die-off of animals in the East-Pacific.”
Not all of these incidents are completely without explanation. Most have been attributed either to El Niño or to red tide (poisoning caused by a bloom of phytoplankton) – although, in this part of the world these are both more or less canned responses to any concern about wildlife. The salmon have some sort of virus, and the squid have been widely and hysterically attributed to radiation from Fukushima. (In actual fact, they seem to have been adversely affected by shifting pockets of warm water caused by the El Niño.)
Four years ago a weather phenomenon known as La Niña resulted in unusually cold waters off the Chilean coast, which resulted in fish which would normally have been in Peru staying in Chile. While the Peruvian birds dropped dead from starvation, Chilean birds stayed inshore to catch the fish, getting caught in nets and dying in such quantities that an expert at one stage remarked; “There won’t be any left this time next week.” In Alaska this year, on the same coast, there is an ongoing and catastrophic die-off of thousands of seabirds (mostly murres). The murres are starving; due to either over-fishing, global warming, El Niño, or a combination; and the ever-growing heaps of their dead bodies along the shore are astonishing tourists and scientists alike.
It’s clearly not a good time to be a bird. 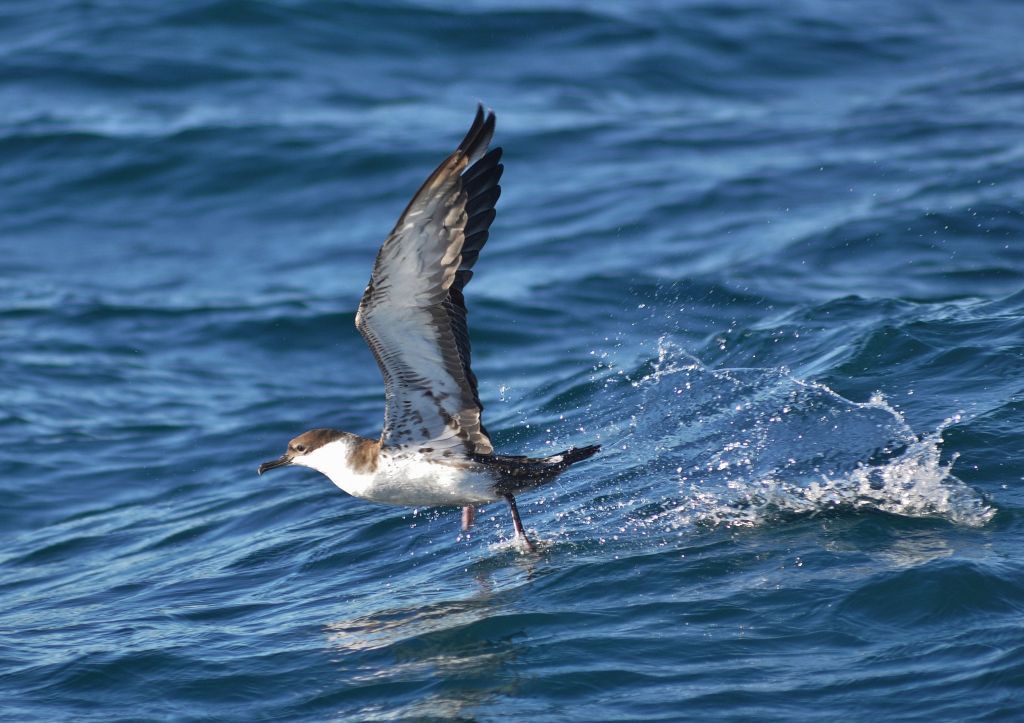 I recently came across an article on a science website, with the title: “Just chill out. The penguins are probably fine.” It addressed a current problem in Antarctica, where a gentoo penguin colony has been blocked off from the sea this year by a massive iceberg; resulting in over 150,000 dead birds. But, the author points out, this is a natural event, and the penguins have lived with icebergs for a long time; so in the long term all will continue as normal.
Admittedly, the piece of writing was a breath of fresh air after reading half a dozen over-emotional, anthropomorphic articles about the plight of the penguins; and it was also pleasantly reassuring. But the language was also familiar; it brought to mind remarks from people about the epidemic in the seagull colony.
“It’s such a shame – but that’s nature for you.” “It’s probably red tide poisoning, which is perfectly natural.” “It must something to do with El Niño, survival of the fittest.”

Are they right? It’s easy, and convenient, to develop a hardened attitude to these sort of events; especially if one hears of them often, and especially in the cases when man doesn’t seem to be directly to blame. But the arrival of an enormous iceberg in that location in Antarctica has been confidently blamed on anthropogenic climate change, and so has the fact that the affects of the El Niño are getting more and more extreme. A recent study showed that in the last forty years, the number of wild animals (vertebrate only) on the planet has halved. There couldn’t be a better testimony to the fact that the deaths are due to human activities rather than “nature”.
And in the sixty years between 1950 and 2010, we have lost seventy percent of the world’s sea birds.
I can’t help thinking that the events this year must have taken a significant piece of our remaining thirty percent.

The massive wandering albatross in the foreground of this photo might have hatched as many as sixty years ago, when more than twice the number of birds populated the oceans. (Albatrosses and shearwaters in the South Atlantic.)

9 thoughts on “A Bad Year for the Birds”