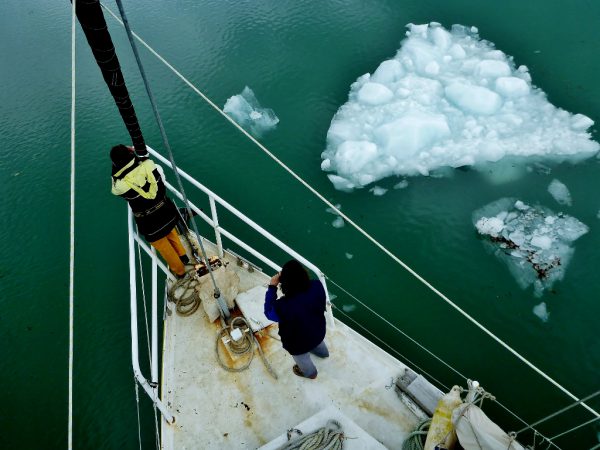 The western coast of Patagonia – pressed, on the one side, by a formidable range of mountains and ice fields; and, to seaward, by the frigid Humboldt current sweeping up from most nether regions of the planet – is more often than not an exception to the rule when it comes to climatic phenomena. One of these exceptions is that it harbours glaciers, reaching down into the sea, which are much closer to the tropics than any others in existence: Chile’s northern-most glacier, at around 46°S, would at the same latitude – if the planet could be inverted – have the balmy waters of the Mediterranean lapping around its foot.

Recently I was able to pay one of these glaciers a visit: a slight detour on our trip northwards through the channels took us up Peel Inlet and into Seno Amalia; a narrow and high-sided fiord gouged out, like all the other channels, by the movement of ancient glaciers, but in this case with a remnant of the icy perpetrator still remaining at its head. On the chart it bears the name of Glaciar Skua, doubtless chosen by one of the early and enterprising mariners – mostly European – who were sent off with instructions to try and chart the dangerous stretch of coastline. The Amalia glaciar is in fact one of the the largest in the area; with a towering face of sheer ice spanning over two miles in width, it compares to some of the more well-known and well-visited glaciers in the south in much the same manner as a torrent eclipses a trickling stream. But there is a good reason for Skua attracting less attention than many of its rather less impressive counterparts: the glaciers in the Beagle channel are a short trip from the city of Ushuia, whereas for Seno Amalia the nearest settlement – barely large enough to earn the title of a village – is at a distance of over 150 miles of perilous navigating and inhospitable weather. As a result the glacier’s admirers seem to be confined for the most part to passing yachtsmen; and even from this quarter, being positioned a little off the beaten track, it probably receives very few visitors. 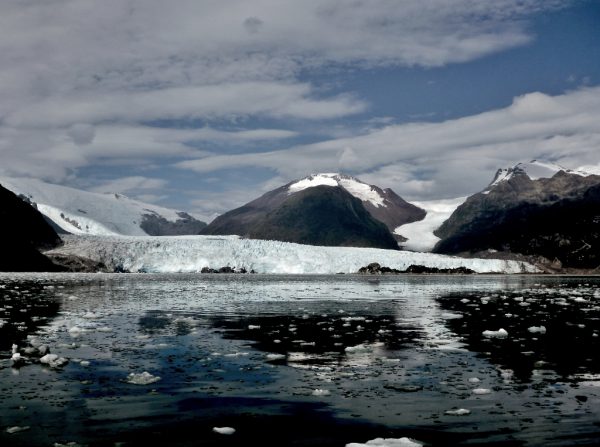 In the region of abundant wind and almost constant rain, an evening of unusually clement weather graces Glacier Skua.

There would perhaps be even less if it was not for H.W Tilman, every high-latitude sailor’s hero, who went to Peel Inlet some sixty years ago with a view to being the first to hike across that particular ice field. In his well-known book about the endeavour he describes his arrival: “When ahead of us a long stretch of what appeared to be white water was seen from shore to shore we awoke to the fact that that trouble might be at hand, and I began to wonder where we could go should Peel Inlet proved to be blocked… As we closed the shore to creep along to Amelia this thick ice [made] even that unattainable…Three of us embarked in the dinghy to see how near we could get to the glacier. By our later standards the ice cannot have been thick, for we rowed for nearly an hour without having to haul the dinghy between them with an ice axe. But soon bigger floes barred our way…”

The narratives of visitors to Peel Inlet all coincide in their descriptions of the quantity of floating ice; which is shed by the glaciers and often, it is claimed, builds up in such quantities that it bars access to the entire channel. Pieces are said to attain proportions exceeding that of a cottage, or, as one pilot book emphatically asserts, a cottage complete with a garden. The main cruising guide for the area warns that “[one must] consider it impossible to sail at night, ice movements are erratic, closing passages that were open only ten minutes before… there could be major damage to a GRP or wooden craft.” After the dire warnings it was a slight anticlimax to arrive in Peel Inlet and find that there was not the slightest trace of any ice within sight. Continuing into Amalia we could still have been cruising Caribbean waters for all the bergs surrounding us, and we were within a few miles of Skua itself before we came upon a single scrap of glittering ice washed up on a nearby shore – by which time we preoccupied by a matter of rather more importance: the absence of the glacier itself.

Glaciers are conspicuous, and given their size and relative immobility are normally not easy to mislay, but although its position was clearly marked on our chart (dating from 1970) this one was nowhere to be seen. From Tilman’s meticulous description it was easy to ascertain exactly where in the surrounding landscape the glacier fitted in, and even identify the “bald rocky hill” around which it was said to have poured in 1955; but it was only after proceeding up the barren channel for couple of hours that we rounded a corner and were satisfied that the glacier had not relocated itself entirely. It still existed – at least in part – but the face was five miles away from where both the author and the chart had placed it.

The tragedy wasn’t hard to piece together from another examination of the charts – including a more modern one – and a glance upwards at the lines etched into the steep unwooded sides of the fiord. The vast majority of glaciers in Chile are receding (as are the vast majority of glaciers worldwide, as the planet begins to show the first affects of man-made climate change) and in Tilman’s time it seems that the face of Skua had already began to draw back into the sound. Referencing a photograph from 1933, he remarks that “it seems at that time the glacier… flowed round [the “bald rocky hill”] and united again at its foot, thrusting out into the sea an unbroken front of twice the present width. Now only the ice stream to the north enters the water; the southern ice stream stops short a hundred yards from the shore … many feet above the present level, a distinct line of polished rock shows the height to which the ice once reached.” 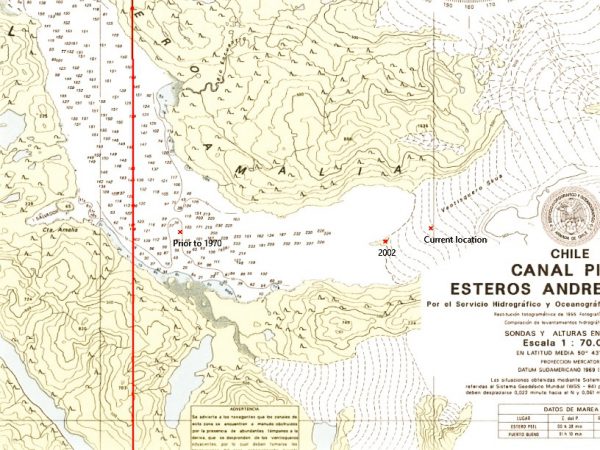 On a chart from 2002, positions are shown where the glacier met the sea both thirty years before and a decade and a half later. But according to Tilman’s source from 1933 the glacier’s face must once have overlapped the edges of two-mile-wide channel by the same distance again.

The event was interpreted only as a bothersome setback to his plans of landing on the glacier, and Tilman could hardly have predicted how the landscape of a few decades later would appear; whilst I in turn found it barely possible to comprehend that had we been in the same location whilst he was visiting Peel Inlet, we would have found ourselves buried – along with the entire visible landscape – beneath millions of tons of crevassed blue ice. The area covered by Tilman’s “southern ice stream” is today occupied by a forest and two lakes: of the ice which apparently stopped a hundred yards from the shore there remains no trace whatsoever. The remainder of the glacier, once only the northern half, has reached the far end of the Amalia fiord and completed its withdrawal back through the groove which it created: as it continues to melt it can no longer retreat, and will surely just disappear up the hillside and cease to exist.

In the light of what has taken place in the sixty years since he visited Peel Inlet, Tilman’s first impression when he set eyes on Glacier Skua is painfully ironic: “The way in which it flowed out into the deep waters of the fiord suggested to an observer the idea of inexhaustible, overflowing abundance, an unmistakable hint of the vastness of the snowfield from which it came.”

The glacier’s supply of ice and snow is in fact close to being exhausted; in a decade, or a few at the most, the massive structure will have been washed out on the tide as chips of ancient and rapidly melting ice. The vertical ice face no longer awes with it’s astonishingly infinite, superfluous quantities of material; instead it produces an urgent sense of its impending disappearance – the last dregs, backed up against the end of the valley and stretching down to the water’s edge, seemed to be dwindling almost by the minute. Barely an hour later, as we motored back down the fiord, I half expected to glance back and see a bare, polished mountainside in its place. 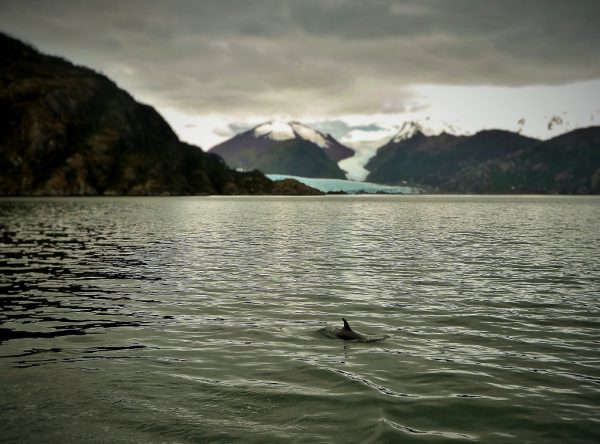 A Peale’s dolphin cruises in front of Glacier Skua, and might easily outlive it.